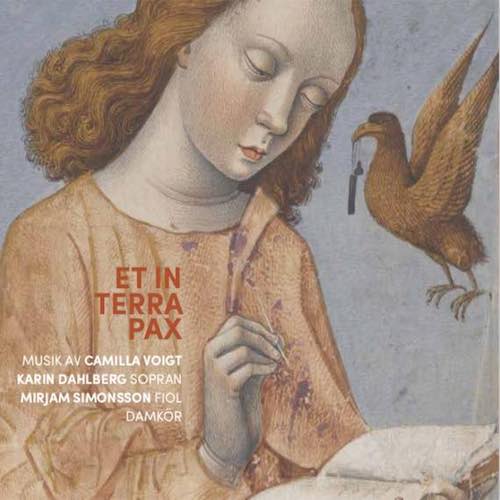 The newlywritten, exciting work 'Et in terra pax' (And on earth peace)
by Camilla Voigt is composed for women's choir, soprano solo, violin, piano andorgan.
The basis of the work is Latin texts, where the movements such as Kyrie,Gloria, Sanctus and Agnus Dei are composed and arranged based on Gregorianmelodies. Here we also encounter the introductory words in Mary's praise song,Magnificat and the medieval hymn Ubi caritas.

The lyricshave consistently received a positive, beautiful and well-sounded musicalcostume. Soft parts alternate with more powerful ones, giving good effect inthe composition. It is about a very personal tone language without search foreffect. The whole appears to be simple in a good sense but never becomestrivial.

The choralwork 'Et in terra pax' is a particularly positive example of newly writtensacred music, which bridges the present with the past, and which is alsoclearly borne out by the important interaction between text and tone. As alistener you feel enclosed. It is a work of darkness and light that sends raysof hope to the listener.

Soprano Karin Dahlberg, acclaimed for her broad sense of repertoire and strong radiance, has performed with a variety of Swedish and international symphony orchestras and is currently involved in yet another grand concert at the Berliner Philharmonie.
The music, which is also complemented by percussion, double bass and flugelhorn,moves in the borderlands of both jazz, folk and classical music. These areprayers and phrases from the liturgy of the Church that in different waysrepresent life and conditions we humans share equally. An invitation for us notto let darkness prevail but to always seek the light.