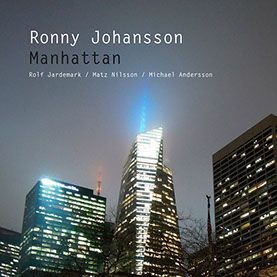 Ronny Johansson started his jazz piano career by playing with the legendary Eric Dolphy at a concert in 1961. After his piano exam in 1975, he has shared his time teaching piano at the School of Music Göteborg University until he retired in 2009, and playing jazz gigs. Later years with his trio, mostly local gigs, but also touring twice in Japan and making six CD:s. In total Ronny has made thirteen records as a leader.

MANHATTAN grew out of a wish to celebrate his 75th birthday with a recording in a new setting. Matz Nilsson, bass/el.bass and Michael Andersson, drums/perc. were familiar with Ronny and his music since they played together in the eighties. A new direction was to add guitar to the trio and it turned out great! Rolf Jardemark, a jazz guitarist, who has been around for a while blends very well with the band.

As a whole, the session was a swinging one with a fantastic sound and everything went smoothly with first takes only. Surely, we hope this is the start of a new band with more things to come in the near future!