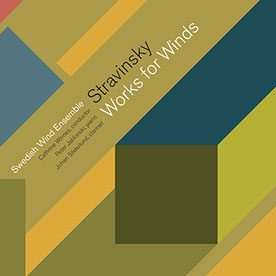 The Stravinsky composed a small but significant body of works for wind instruments of which the larger ones are presented here, by the Swedish Wind Ensemble. The first three wind works, Symphonies of Wind Instruments, Octet and Concerto for Piano and Wind Instruments, were created in the twenties, while the concluding two wind works, Circus Polka and Ebony Concerto, were Stravinsky’s few excursions into the genres of jazz and popular music in mid 1900’s.
Symphonies of Wind Instruments (1920, revised 1947) is considered one of Stravinsky’s greatest works. Octet (Octuor) (1923, new version 1952) is recognized as one of the first works in the neoclassical genre. Concerto for Piano and Winds (1923-24, revised 1950) is one among several piano pieces composed as vehicles for Stravinsky himself in an effort to make money as a performer. Circus Polka (For a Young Elephant) (1942) was written in the United States. This is a short work for winds and stands apart from the other pieces presented. Ebony Concerto (1945) was commissioned by clarinettist Woody Herman and is scored for Herman’s Big Band with a French horn added.
The Swedish Wind Ensemble (Blåsarsymfonikerna) is the largest professional civilian wind ensemble in Sweden. Today it counts twenty-five wind players and two percussionists frequently expanding to accommodate the demands of larger works. The orchestra was founded in 1906 but has since then developed into a flexible professional modern wind ensemble. Conductor Cathrine Winnes, based in Norway, has rare communicative gifts, outstanding precision and uncompromising musicianship. She is known for her work on the podium and also for her pioneering work as a broadcaster. Winnes was appointed artistic director and chief conductor of the Swedish Wind Ensemble in 2016. Swedish-Polish pianist Peter Jablonski is internationally acclaimed for his natural fluency of playing and an extraordinarily deep knowledge of piano repertoire, which make his performances timeless and captivating. Jablonski has been performing on major world stages for over twenty-five years. His extensive discography includes recordings he has made for Decca, Deutsche Grammophon, Philips, and Altara labels for thirty years. He received numerous awards for his recordings, which include the Edison award and the Grammophone Classical Music Award. Clarinettist Johan Söderlund is the currently serving concertmaster of the Swedish Wind Ensemble. Apart from his work in the classical field Söderlund is a comfortable performer in jazz and other improvised music which mirrors his broad musical tastes and skills.